New York Times
Frommer’s Review
At the main Huggo’s dining room, fresh seafood remains the signature, as does the coral-strewn beach with tide pools just beyond the wooden deck. The tables are so close to the water, you can see the entire curve of Kailua Bay. Feast on sautéed mahimahi, steamed clams, seared ahi, or imu-style chicken cooked in ti leaves. At lunch, specialties include kalua-chicken quesadillas, brick-oven pizzas, and sandwiches ranging from hot turkey to prime rib and fresh fish.

Bon Appetit
One of the nation’s top neighborhood restaurants. “…the food is as good as the view, and the view is terrific.”

Coastal Living Magazine
“this open-air restaurant features a thatched roof bar, nautical-style rope along the deck, plenty of wave-breaking rocks below, and front row seats for showy sunsets…making eating here at cocktail-sunset hour a must.”

Hemispheres Magazine
“The sun is nearing the water again, which means it’s time for a giant beer and a guava-barbeque pork sandwich in the sand at Huggo’s on the Rocks. A band breaks out into some island standards while the tide rolls in….”

Los Angeles Times
Toes-in-the-sand bar: Huggo’s on the Rocks, Kona. Strike up a conversation here and you’ll find yourself swapping stories with locals. This is the place to grab a brew and watch the dolphins jump offshore.

Food Network
Rachael Ray visits Huggo’s on the Rocks, for oceanfront views in Kailua-Kona, HI, on Food Network’s $40 a Day.

Marin Magazine
“We put together a list of five top Hawaii experiences you won’t want to miss. Huggo’s, a local favorite since 1969, has a sunset dinner spot that won’t disappoint. Huggo’s features great views of Kona harbor.”

Frommers
At the main Huggo’s dining room, fresh seafood remains the signature, as does the coral-strewn beach with tide pools just beyond the wooden deck. The tables are so close to the water, you can see the entire curve of Kailua Bay.

Portland Family
Best meal I ate was fresh catch of the day. Bonus: the view is exceptional. Must order item: furikake fries.

San Diego
“We selected Huggo’s as our home base while visiting the Big Island. Founded in 1969, this place is still way cool. Dinner was awesome in the upscale dining room. Do not leave Kona without trying the teriyaki steak. How the heck did they make that sooooo good.”

Outrigger Hotels Magazine
This is the only restaurant in town with prices and atmosphere comparable to the splurge restaurants at the Kohala-coast resorts. Open windows extend out over the rocks at the ocean’s edge, and at night you can almost touch the manta rays drawn to the spotlights. Relax with a cocktail for two and feast on fresh local seafood; the catch changes daily, and the nightly chef’s special is always a good bet.

Saturday Society
“For regional cuisine showcasing local products from Big Island farms, fisherman and ranchers, dine at Huggo’s. As soon as diners walk through Huggo’s front entrance, they are surrounded by the ocean and tantalizing sights and aromas emanating from the exhibition kitchen. Variety has been the key  to culinary success…”

The Roaming Boomers
“Adding to the allure of the restaurant is its ocean-front setting on ‘Onea Bay in historic Kailua Village where boutiques, galleries, and specialty shops await you for an after dinner stroll. Well, as much as we hated to see the beautiful ocean sunset turn to darkness, it was now time for our wonderful journey to end as well.
We enjoyed a wonderful dining experience and can wholeheartedly recommend Huggo’s restaurant to you when you visit Kailua Kona on Hawaii, the Big Island.”

Real Food Traveler
“The guava glazed ribs were sweet and flavorful and fall-off-the-bone tender and come on a bed of crispy coleslaw. If there hadn’t been plenty of other delights, I could have made a meal out of these delicious ribs. Our entrees were really standouts. Real bottom line: When you’re on the Big Island, treat yourself to a meal at Huggo’s. The food, especially their wonderfully fresh fish dishes, will make this one of your most memorable in an oceanside setting that can’t be beat.”

Big Island Traveler
Huggo’s prides itself on its enthusiastic participation in the local food movement. Huggo’s Chef is strongly dedicated to serving only the best locally caught fish and seafood items with fresh produce that highlights many of his nightly dinner specials. From Big Island raised Kumamoto oysters, ahi poke, locally grown clams, to the fresh catch-of-the-day, there’s a copious list of daily seafood options.

Zagat rated
Yelp – Five star rating
Trip Advisor Ranked #22 of 133 restaurants in Kailua-Kona
Back on the Big Island for a few weeks. Tried a few new places for dinner and ultimately came back to Huggo’s for dinner again. You just can’t go wrong. Dinner, service, atmosphere, everything was perfect. This night, the Chef and Manager came out and visited with the customers and were genuinely interested in our satisfaction. Try it!
Combine spectacular Kona sunsets with the fabulous food fashioned by Chef Ken Schloss nightly, all served up oceanside and you have the finest seafood restaurant on Hawaii Island. Entertainment nightly, professional wait staff with services provided with genuine aloha, gracious ambiance and you have an evening you won’t forget. We loved every minute!
Four Square
“Try their happy hour. Sit at the bar for excellent service from Bill the bartender.

Huggo’s captured the Bronze award as Best Big Island Restaurant in 2011 by Honolulu Magazine, celebrating its fourth year as a Hale Aina award winner. Each year, Honolulu Magazine readers vote for their favorite restaurants in the Islands. This year, Huggo’s was the only restaurant in Kona to win a Hale Aina Award. Huggo’s has also received this prestigious accolade in 2004, 2005 and 2006. 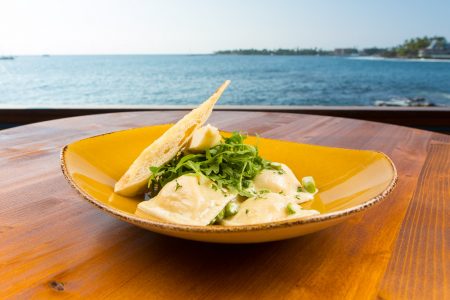